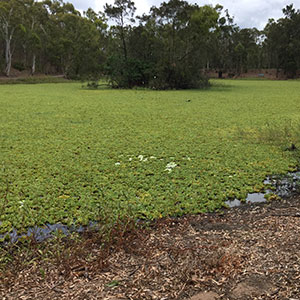 A popular Gladstone recreational area has returned to its former glory after the control of water lettuce from the duck pond at Reg Tanna Park.

Water Lettuce is considered a restricted invasive plant under the Biosecurity Act 2014 and must not be given away, sold, or released into the environment without a permit.

Gladstone Regional Council staff commenced work to control the water lettuce in August 2019, via a biological control being the introduction of weevils, which was monitored over approximately three months.

Unfortunately, during this period rain and heat provided ideal growing conditions where the water lettuce flourished, and Council conducted another round of biological control in December.

Continued monitoring took place during this time, and while the manual removal of the water lettuce was considered, it wasn’t deemed safe enough to undertake.

Gladstone Region Councillor Chris Cameron said this period of chemical control was conducted in stages as to not cause detrimental effects to the water quality and ecosystem.

“The period of chemical control began in February and took place every fortnight,” Councillor Cameron said.

“Council staff were very mindful of fish and other animals in the area, as well as other water plants, to ensure they were only targeting the water lettuce.

“The decision to use chemical control wasn’t made lightly, as Council undertook alternative control methods prior to this decision.”

Cr Cameron said there was a possibility the water lettuce could return, as seeds can remain dormant for some time, but added that Council will regularly monitor the pond.