What is blue-green algae?

Despite the name, ‘blue green algae’ refers to a phylum of bacteria called ‘cyanobacteria’. Numerous types (species) of this bacterium are naturally found within Australian fresh and marine waters, and play an important role in maintaining a healthy aquatic ecosystem. 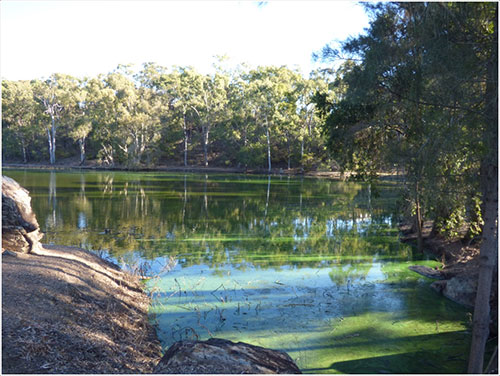 Under certain conditions, cyanobacteria can rapidly grow and dominate the water, called an ‘algal bloom’.

These blooms can either be seen across the top of a waterway, or throughout the water column, depending on which type is causing the bloom.

Signs of a bloom include:

What causes a blue-green algae bloom?

Like our own digestive systems, waterways rely on a balance of ‘good’ and ‘bad’ bacteria to function normally.

Under favourable conditions or following a rapid change in a waterway’s chemistry, the balance of bacteria within a waterway can become unstable; and cyanobacteria may rapidly multiply, causing an ‘algal bloom’.

Traits of a waterway that may trigger a bloom include:

Some Australian waterways host algae blooms annually, as part of their natural cycle. For example, waterways which naturally deplete during the dry season, often have blooms at the start and end of wet season.

Most blue-green algae blooms are natural events that cannot be stopped; however, steps can be taken to reduce the frequency and severity of these blooms.

Some of the actions that Council undertakes to minimise blooms, include:

Some species of blue green algae naturally occur in saltwater, particularly in warmer tropical and subtropical ocean waters. While marine blue green algae are less frequently seen compared to their freshwater counterparts, certain environmental conditions can cause blooms to form on beaches and within coastal creeks.

Such ocean conditions include:

Trichodesmium blooms are most noticeable when they approach or wash up upon shore.

These blooms, beached or free floating, usually disappear in a few days.

In rare circumstances, large storms and/or king tides may cause Trichodesmium to enter brackish coastal creeks, where the bloom may persist longer than average due to the stagnant/slow moving waters.

How to spot a Trichodesmium bloom

In most circumstances a Trichodesmium bloom is harmless; however during the decay process it may decrease oxygen levels of the water which may impact aquatic animal health.

Where Trichodesmium becomes stagnant, a transparent toxin may be released. This release is indicated by the colour of the bloom, as it changes from a rusty brown colour, to a green/pink colour.

This toxin is rarely in a high enough concentration to pose a threat to human health. Trichodesmium can be easily washed off the skin by rinsing with water. As a precaution, Council advises beach users to avoid swimming within or contacting waters containing an active Trichodesmium bloom. 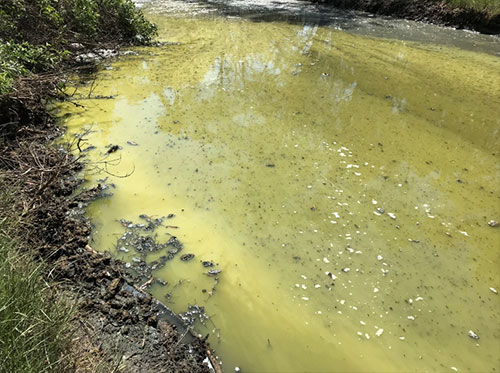 Agnes Creek at Agnes Water was impacted by Trichodesmium from late-October to early-December 2019. The bloom was naturally brought on-shore by wind and tides and became trapped in the waterway when the creek was open to the ocean following a large rainfall event.

The natural decomposition of the bloom resulted in a strong ‘fishy’ odour that impacted visitors and close residents. Following the initial removal of thick algae scum by Council on 11 November, the bloom decomposed and was eventually flushed out following adequate rainfall events in early December.

The community are advised to avoid contact with the blue-green algae bloom and to rinse with freshwater if contact occurs. For more information about Trichodesmium visit the Queensland Government websitehttps://www.qld.gov.au/environment/coasts-waterways/marine-habitats/algae-blooms