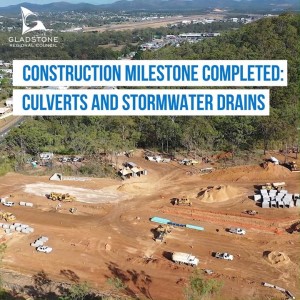 Work on the Philip Street Communities and Families Precinct is progressing according to schedule after the site recently passed another construction milestone.

Having completed the ‘cut to fill’ milestone in April, Stage 1a of the Precinct has progressed further with the ‘stormwater culverts and structures’ milestone now complete.

This stage involved the installation of pipes, pits, manholes and headwalls with one of the precast pits weighing 22 tonnes, requiring a 100-tonne capacity crane to lift into place.

“The culverts were precast and delivered to the Precinct, and installed using lasers for guiding precision,” Councillor Goodluck said.

“The ongoing COVID-19 health emergency caused occasional delays to deliveries due to transport shortages, but this didn’t have an impact on the timeline of the culvert milestone.”

The Philip Street Communities and Families Precinct has so far created 66 full-time equivalent jobs since shovels hit the ground in January 2020.

Cr Goodluck also encouraged retirement and aged care providers who haven’t already submitted an Expression of Interest to build, operate and maintain a facility within a portion of the overall site also containing the Philip Street Communities and Families Precinct, to lodge a submission.

“The EOI period opened on 2 May and will remain open until 5pm on Tuesday 28 July,” Cr Goodluck said.

“Submissions must be lodged electronically via LG Tender Box as no EOI will be considered if received by post, facsimile or email.

“Council is seeking Expressions of Interest before inviting written tenders, as GRC is seeking to identify the facility options available from potential tenderers prior to making any commitment.”