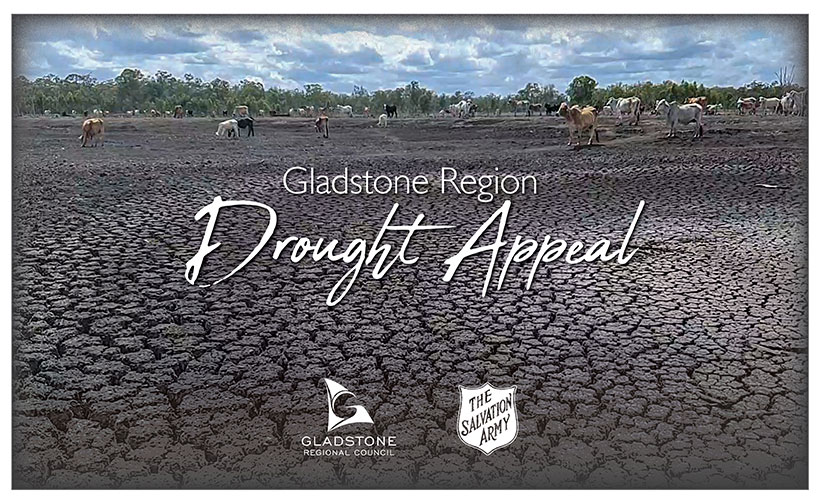 The Gladstone Region Drought Appeal, which was launched in late November to support droughtstricken farmers, has received strong community support with more than $10,000 raised to date.

Gladstone Region Mayor Matt Burnett today met with an official from The Salvation Army, who are partnering with Council to support the Appeal.

Together they thanked everyone who had donated money to the appeal so far, which has a current balance of $13,032.

“The response has been very gratifying as we try to provide much needed financial support to our region’s primary producers,” Councillor Burnett said.

“We would like to remind residents the appeal is running all through summer until 29 February.

“People can donate online at www.gladstone.qld.gov.au/drought-appeal, in person at any Westpac branch or via the collection tins at upcoming events including the Queensland Reds versus Melbourne Rebels match at Marley Brown Oval on 17 January and Australia Day celebration.”

The Salvation Army’s Central Queensland Area Officer, Major Peter Sutcliffe said they were delighted to support Council with the initiative after the Mayor approached them.

“Caring for the community is at the very heart of what we do, so to come on board and provide practical support in this way, is a natural extension of that,” Major Sutcliffe said.

“We very much look forward to supporting our rural friends in 2020.”

For decades, the Salvation Army has provided material, emotional and spiritual support to farmers and rural communities through their network of rural chaplains and flying padres.

Major Sutcliffe said this was not high-profile work but had been vital in helping farmers to stay on the land and persevere through tough circumstances.

There are many ways to donate including: