Roald Dahl’s The Twits is a comedy of rebellion and justice in which Muggle-Wump the monkey races to outwit Mr and Mrs Twit, two of the most terrible and disgusting people ever to have lived.

Mr and Mrs Twits, the most horrible people ever to live on the stage of the earth! How unpleasant is Mr Twit, a hairy-faced, grubby and messy old man! How mean-spirited Mrs Twits, whose once pretty face, now ugly and reflecting her consumption of nasty thoughts!

Being the delightful humans they are, Mr and Mrs Twit spend their days playing dirty tricks on each other. Mrs Twit puts worms in Mr Twit spaghetti – yuck! Mr Twit convinces Mrs Twit has the dreaded shrinks – how mean! Insults are flying left, right and centre and a tag game of revenge and out-trickery is never ending.

Meanwhile, Muggle-Wump, a poor little monkey is held captive by Mr Twits. Obsessed with putting on The Great Upside-Down Monkey Circus, Mr Twits relentlessly trains Muggle-Wump to perform death defying stunts, punishing the monkey as he sees fit. Poor little Muggle-Wump. But! Fate changes for Muggle-Wump with the arrival of Roly-Poly, a glorious bird full of grace and pomposity. Together a plot is devised to secure Muggle-Wump’s freedom and punish The Twits forever. 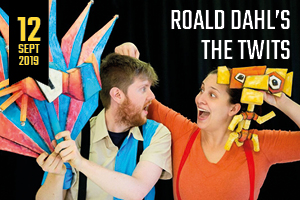